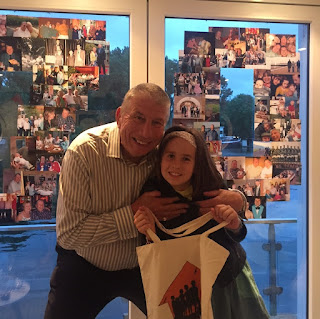 A little girl with a big heart staged a fundraiser for our family as part of her granpa's 70th birthday celebrations on Saturday.
And that makes three generations of Happy House fundraisers in the same family!
Eva,nine, whose mum Anna Collinge  is in Ushindi's sponsor family, wanted to do something extra for her grandpa, Mike Dickinson, when her family hosted his 70th birthday party at their houseboat in Amsterdam.
Eva says: "June 18 was my grandpa's 70th birthday party at my house In Amsterdam and he invited 20 friends of his.  So I held a fundraiser.
I made and sold pictures, coffees and other stuff and I ended up raising £70 and 80 pence."

That's enough to buy three new desks for school, which is a fantastic result, and it is specially nice when a child raises money for our children.
Mike, who lives on the Fylde Coast,  very kindly asked friends for donations for Happy House instead of birthday gifts.
He celebrated his birthday with family and friends with a canal cruise followed by a party at Anna's. 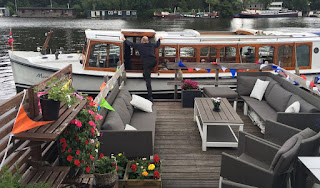 Mike  and his wife, Sheila, are fantastic supporters and are in Hussein's sponsor family.
Their son Andrew who, with his wife Amy, volunteered at Happy House, has raised thousands by undertaking some tough sporting challenges. They are  in Lesley's sponsor family.
We are grateful to them all for all they do and wish Mike a very happy birthday from all the Happy House family.
Posted by Children of Watamu at 05:30