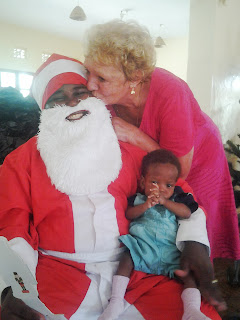 Jingle bells, jingle bells , jingle all the way ...  there was music ringing out when Santa arrived with a sackful of goodies for our Happy House kids.
Excited children gathered round, laughing and chattering as he made his entrance.

This year he was given a helping hand from Jackson, our friend from Imperial Bank, and Daniella and Margaret were his mischievous helpers, the elves.
There were presents for everyone , followed by a delicious meal of hot dogs with onions and tomato ketchup, followed by ice-cream with lots of lovely fresh fruit,
Susanna Gregorio,  and Levian, the little boy she is guardian too, visited with friends to and were thrilled to see the delight of the children as they tried out the bicycles bought by money raised by GetFit , the fitness clubs in Italy and Switzerland owned by her husband, Livio Leardi. 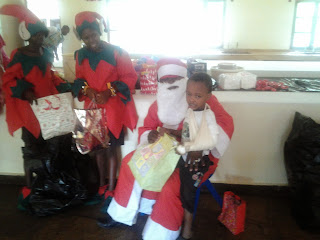 The two labrador pups now have names -  Polly and Big Al. They have been named after Papa' mum and Sue's dad.
Mama said :"Musyoka and Francis have taken charge of the feeding programme. We bought puppy biscuits and dog meat for them and Papa has shown Musyoka how much to give 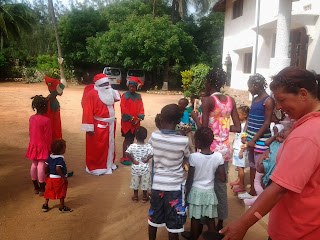 It is lovely to see the pups out playing, then they go and have a lala, just as our babies do."

Posted by Children of Watamu at 08:57