On the ball with Mama and Papa's 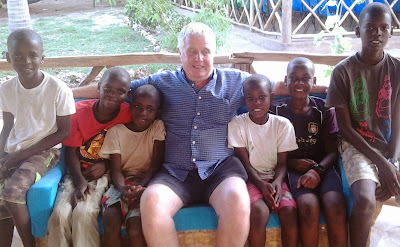 Anyone who has met Papa Dave will know that there is one subject he never tires of talking about ... football!

And our older boys are all growing up sharing their Papa's passion for the beautiful game. When there is a big match on TV there's nothing better than having someone to watch it with.
On Sunday, Katana, Fikiri, Samson, Hassan, Evans and Sifa went to watch the match at Mama and Papa's house.
Uncle Billy says: "They had a lovely afternoon watching the match between  Manchester United  and Tottenham Hotspurs which ended with a draw of  two apiece.
Evans and Fikiri are Manchester fans though they have been taught against being fanatical supporters as it may lead to negative effects .
Moreover they have been guided to learn to respect other teams and supporters with their opinions and choices.
They have  also learn tto take defeat honourably as well as to celebrate triumphs in moderation.
They enjoyed the match fully with a half time break with a  refreshing soft drink and crisps while full time found them finishing off with bread rolls with sausage and onions.
It was  a lovely afternoon for them all."
Papa included!
Posted by Children of Watamu at 08:22