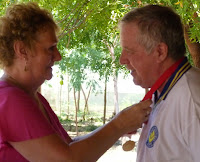 Papa’s 70th birthday had been on hold since April.  At that time Mama was in hospital with a very serious hip infection and instead of being here in Kenya, celebrating with their kids,  they were supporting each other through a dark, difficult and painful time.

On Saturday, five months later, Papa had his party – a joint celebration to mark both his birthday and Mama and Papa’s homecoming – all organised by the children. 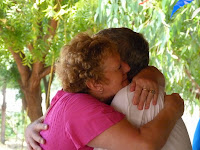 With Margaret and Musyoka as very competent masters of ceremonies, it ran like clockwork – with every child knowing what to do and when!
Mama wanted it to be Papa’s day.  He is, truly, the wind beneath her wings. 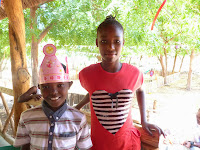 When she started to talk about what a support he had been to her through some of the worst times of their lives together, she broke down in tears.
“We cried,we laughed and we loved our way through it,” she said.
The children were delighted when Uncle Billy announced that Papa was top receive a Medal of Honour and read, and explained , the accompanying  citation:
Name:  David Hayward  ( also known as Mr Leeds United)
Rank:  Papa
Entered service at:  Happy House, Watamu, Kenya ,2010 (and in 2000 to Children of Watamu) 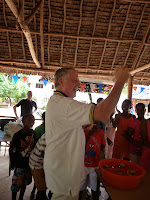 Citation:  This medal is awarded for extraordinary heroism, gallantry and selfless devotion shown in the line of duty as husband and soulmate to Mama Sue and as Papa to the Happy House family,  during a period of  exile from March 2012 to September 2013.
Without thought to himself, he has done everything he could to look after and care for Mama Sue. Nothing has been more important than her comfort and wellbeing.While Mama has been recovering from illness, Papa has done all the shopping, cooking, washing, ironing and cleaning. He has been there for her every minute of every day.
He has made her laugh when she’s been sad, and brought light into her life at times of darkness.
Although, like Mama, so homesick for their wonderful Happy House family, Papa has lifted Mama’s spirits and encouraged her every step of the very long road which has brought them, now, to the only place they want to be:
Home at their beloved Happy House family.
David Hayward snr, Mr Leeds United, Papa Dave you are … SIMPLY  THE  BEST 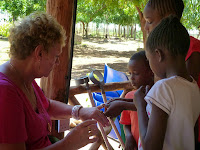 Everyone was excited as Mama presented Papa with his medal. Cheering and applauding the Papa they love every bit as much as Mama does. 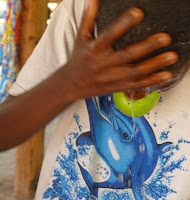 Thrilled to bits, and emotional himself, Papa spoke of Mama’s courage and urged everyone to help him by helping her, and, if they thought she was doing too much, to remind her “pole, pole”, slowly, slowly.
No birthday is complete without cake, and a big birthday cake was brought out for Papa to cut  - into around 100 pieces! 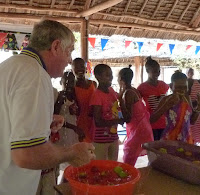 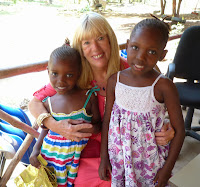 Mama and Papa treated the family to hot dogs and ketchup, and there were lots of games including musical chairs, children’s and adult dancing competitions, balloon bursting, biscuit eating (Linus won!!) and Papa introduced apple bobbing! 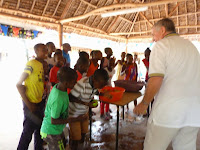 It was something no one had ever seen before, and Papa, demonstrating, did the perfect bob – plucking out an apple at first attempt. All those big enough were eager to have a go, with an apple their prize. Those too small, all got any apple anyway. 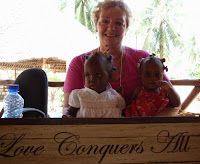 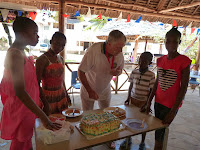 After the party, Papa confided:“That was the first time I’d ever done that”.
A surprised Mama asked “Why?”
“Because I was never chosen to be in the team,” said Papa.
That will never happen to a Happy House child. 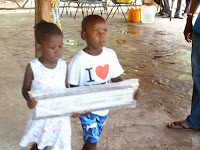 The party was wonderful, there were gifts chosen by the children for Mama Papa and Auntie Libby, and a special gift for Mama presented by Linus and Neema–  a plaque with the words “Love conquers all.”
In Mama and Papa’s marriage, the love story to end all love stories, and at the Happy House nothing could be more true.

Posted by Children of Watamu at 06:40