A brother and sister, whose single mum is, tragically, suffering from an incurable illness, have joined our family after being identified as being in need of care and protection.
We were told about their case by some kindly Italian friends, who were concerned for the mum and her two little ones, Dulla and Rehema.
Uncle Billy went into the interior with them to investigate and after 20 minute drive, and a ten minute trek through undergrowth arrived at the settlement where they found the kids with their grandmum who was trying to weave a basket to sell.
Uncle Billy said after talking to the children's mum he was convinced of their need for a secure home and phoned ahead to tell Mama and Papa that they would be bringing Dulla and Rehema home. 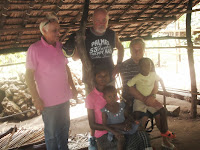 "They immediately got the family together for the traditional grand welcome that doubtless makes every child remember their grand entry to the family with nostalgia
On arrival, they were  overwhelmed by the VIP reception and soon there was a group willing to take them to  their bedrooms, the shower was ready, plus a change into fresh new clothes and crocs as hot meal was waiting……. 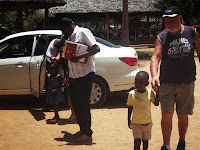 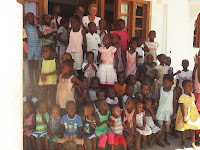 "Triza, a local girl, had expressed her fear that the little girl would cry incessantly for her mom. This is far from the case.
" They have settled in as quickly as any children who have come to us.
"The next day I found them mingling with the rest and just being kids without a worry in the world. That is, indeed ,what we like to see and can only describe  as, simply,  the Happy House magic!"
Rehema and Dulla bring our family number to 78 and,again, their circumstances reinforce the vital need for our current Room for Another project.  If you can help by fundraising towards the £18,000-£22,000 to pay for it or would like to sponsor a Happy House child please email: elizabethgomm@childrenofwatamu.net

Posted by Children of Watamu at 08:21