Said brings us to 73, now we MUST make room for more

There was a loving welcome awaiting a new member of our family, little Said, from his big sister, Rukia..
Said, three, and Rukia, eight, were born to the same single mum.  Sadly ,she died in January.
Since then, her mother  had been trying to look after Said but were struggling to earn a living selling goods on the beach whilst coping with the demands of such a small child. He had not attended school and would have no hope of doing so.
The grandmum, who has visited Rukia regularly since she came to us three ago, asked if we could take Said.
He’s a happy chappie, who has settled in quickly, and is enjoying being in playgroup class in school –  having a big sister around is the icing on his cake!
Said's arrival brings us  to 73 and highlights just how fast our family is growing, but we are just about at our limit for the number we can sleep on the ground floor.
Mama Sue has always said that no child who needs us will ever be turned away. There will always be room for another.
And there are so many in need,  so many kids who need a home and a family, for all kinds of different reasons.
Since we opened our primary school on the first floor in January, we have used rooms, originally planned as bedrooms, for our school as computer room, library, staff room and storage and the primary children have been using the first floor toilets.

Mama says: “I feel, that now is the time to turn those rooms back over to our family, to allow it to grow and to give our bigger children more bedroom space.
“Where there's a will there is always a way.
“We have three bandas (bandstand-like constructions, with makuti thatched roof) in the grounds, with electricity already connected.
I'd like to turn the largest of these into four rooms - computer room, library, staff room and school administrator's office.
We would need to install dividing walls. Additional power points would be needed, particularly in the computer room..
We also need toilets for our primary children, by moving our school administrator into a banda office, his current office, where there is plumbing, could be converted for girls toilets, we would then need to add a boys' toilets block elsewhere.
This would mean, with the minimum amount of building, we can return original upstairs area, which mirrors downstairs, to the family giving us more bedrooms, and returns the toilets and showers to family use.
Then we will have more room for children who need us ... there will be room for another one … even a couple of dozen!
As yet we do not have an exact figure for the completion of this work, but our estimate which includes building new toilets is in the region of £16,000-£18,000. We have already received a donation towards the cost and Sue and Elizabeth are working together to try to raise more money.
If you can you help?  Please get in touch or donate via justgiving http://www.justgiving.com/childrenofwatamu/Donate
You will find the full details of the project on our website: http://www.childrenofwatamu.net/wish-list/making-room-for-another
Thanks to Steve and Cherith
The Room for Another project, will mean that the bigger of the remaining two bandas, donated by Limavady Rotary Club, have to be extend to ensure it is big enough for a dining room for school meals, plus large enough to cater for family and school meetings and gatherings, assemblies and school events. 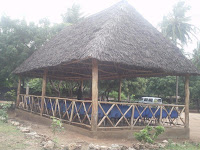 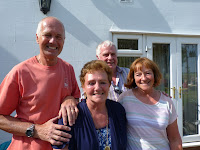 Steve said: "We are delighted to continue to support the Happy House.
"When we started to support the Happy House, one of the reasons was that we wanted to see the impact of any money that we raised.
"With this latest much needed facility which we have been able to fund, this has certainly been achieved, and it is great to think on our next visit to The Happy House we will actually see the physical reality."
Thank you Steve and Cherith for being such wonderful friends.

Posted by Children of Watamu at 07:32