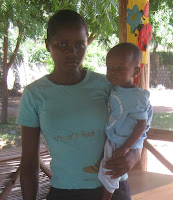 This week the Happy House family is riding a rollercoaster of emotions as children both come and go.
The children's office on Thursday informed Uncle Billy that they had located Moses' mum and that in their opinion she was perfectly able to care for him and that and that they would take on supervision of her and her child.
The mother who disputed everything the old lady had reported  to the police and said that she had paid her daily to look after Moses, whose real name is Elvis, and the children's office had satisfied itself that this was correct and that the two women had had a disagreement..
Uncle Billy, concerned that the girl had given several different accounts of her own situation in the space of a few , tried his best to negotiate to keep Moses with our family for the time being until the full facts were established and she had sorted out her own life, but the children's office were adamant that she was able to look after and support her son and that they should be reunited.
When the mother arrived at the Happy House she had two letters of clearance from the children's office and Uncle Billy had no choice but to hand over Moses.
We have to work within the child protection system in place, however frustrating we may find it, and now we can only hope, and pray, that this little boy will be cared for and cherished as he should be.
But should he need us again, we are here ... a guaranteed safety net.
Posted by Children of Watamu at 08:27