For you, dad - Mama's tribute

Mama Sue's much loved father was a huge influence in her life.

And how proud he would have been of all his only daughter has achieved and to know how her work is making a difference to so many young lives.
Yesterday, Mama paid her tribute to the memory of this special man by dedicating the new Happy House primary school to his memory.
Her precious dad,  Harold Hayes,   was a dedicated prison officer who came from humble beginnings and attended a humble school in a poor area, but despite this he rose to greater heights as a civil servant in the prison service.
Mr Hayes was passionate about education and believed that children should be given every educational opportunity.
The ceremony of dedication started with a parade by the Happy House Scouts with Mama Sue being invited to inspect the guard of honour.
This was followed by raising the flag - both the Kenyan national and the Union flags, and both national anthems were sung with enthusiasm and pride.

Later Mama spoke to the assembly about her father and of his ideals before going up to school for a short prayer of dedication and remembrance of a man who had been a war veteran, a role model as a father and in life, a believer in children and education and a respected prison officer who received recognition from the Queen in being awarded both the Imperial Service Medal and the British Empire Medal. 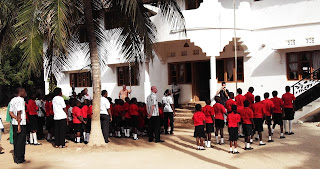 Mama Sue used the ceremony to emphasise to the Happy House children the importance of working hard and making the best of every minute of their lives and the opportunities offered to them  at school and at home at the Happy House.
It was a moving and historic moment in Happy House history that all will look back on a remember with affection.
Posted by Children of Watamu at 07:04