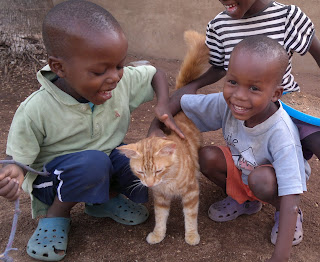 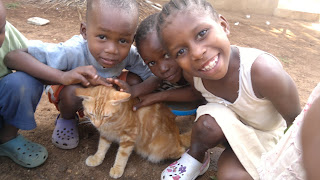 Our Happy is a the purr-fect pet.
She;s placid, easy going and very tolerant. She had a hard time from our two little mischief makers Ushindi and Harrison when she first arrived in our family they would sneak and pull at her tail  or tug at her ears however much they were told not to.
Happy never complained. Uncle Billy says: "She obviously picked up on the cues that soon rather than later the "teething troubles" would be a thing of the past and the little boys would love her and treat her as their dear fruebd,
"It is now that scenario that is typical with Ushindi and Harrson acting as her bodyguards, They not only make sure she is fine but also that she remains Happy.  Truly Happy moments,"
Posted by Children of Watamu at 10:35