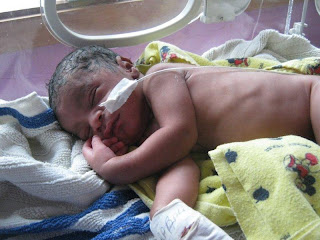 This beautiful newborn angel is safe and sleeping soundly after being found  abandoned by the roadside in the early hours of yesterday morning.

He was barely two hours old.

We cannot imagine what fear and desperation drove his mother to such desperate measures, nor the mental torment she will be going through now, but we do know that, after the hardest start, this little boy now has a home for life, with a family who will love him, at our Happy House.

Sue, now Mama Sue to 52,  tells me: "The sister on the hospital maternity ward called to say the police had brought the baby in, he was found at the side of the road in Malindi, in the early hours of this morning just a couple of hours old.

"He is a big baby weighing 2.5kg, but with being left outside his breathing isn't good so he is on oxygen and antibiotics.
"We have taken in the things they need for him -  baby milk and some of our multi-vitamin drops.
"Hopefully he will be home with us in a few days.
Sue has named our latest foundling, our fourth abandoned baby, Joseph - in honour of social worker Billy's own late father.
Anyone who has heard Billy talk about his dad will know  how much he loved the kind, fair and gentle man who was such a brilliant father to both him and his siblings.
Sue says: "It's nice for Billy he so good with our kids, they just love him.
*If you would like to know how you can help our Happy House or become a child sponsor email elizabethgomm@childrenofwatamu.net
Posted by Children of Watamu at 08:21