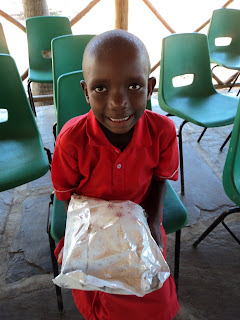 It's taken since last Friday to find time to tell you about the Happy House Kids' Club, writes Elizabeth Gomm.
Sue started the club so the kids would have a chance to get together with everyone else in the family to talk about their week - highlighting both good and not-so-good performances.
Anyone who has something to say can give their views and,. believe me, these kids are more than happy to take the spotlight. They have soon got the hang of democracy at work!
Last Friday, it was decided to appoint two team captains - one for the girls and one for the boys. The children were asked to say who they would like them to be and Janet got the vote from the girls while Evans was chosen by the boys.
The idea is that all the girls or boys know who to go to if they have something they want to talk about - whether it's a bit of a niggle or an idea they would like to put forward. Evans and Janet were charged with getting their groups together sometime during the week so they could report back to kids' club this week.
I made some Star of the Week certificates which I brought with me and each week one child who has done something special in the previous seven days will get the award. The kids and staff have been asked to put forward names - and it could be any child, even one of the babies!
The first certificate was awarded to Ishindi (pictured) for his performance in nursery. When he came to the Happy House there were some worries that he may have special needs, but he has come on leaps and bounds , proving that he just needed to be in the right place with the right people.
Madam Rose the nursery head reported on the excellent performance of all the children in the first school exams. Some really were outstanding.  When she congratulated Oscar, just two points off full marks,  she told him not to be complacent and that if he was to stay ahead he was to pull up his socks. So he did just that, and about six others did the same!
The kids were also congratulated for racing ahead to take leading places in the local inter-school sports. They now go forward to the next round against more schools.
We are so proud of them, but also conscious that our children do have an advantage. They go to school after a good night's sleep in a bed of their own, nourished with a good breakfast, and a daily boost of multi-vits. Most of the kids in local schools will have slept in cramped and uncomfortable conditions and then walked a long way to school on empty tummies.
How lucky our Happy house kids are now compared to the terrible circumstances they were enduring last year. Where would they have been now without the Happy House. Certainly, we know, there are many of them who would not have survived.
Birthdays during the week are marked at Kids Club, and this week it was the turn of Zawadi (pictured) who received a card and gift while everyone sang Happy Birthday.
Uncle Billy had a word about discipline and reminded the kids to look after all the people and things they have around them. Kids are kids and there is bound to be some naughtiness and high jinx but as always , in the Happy House way, it is dealt with in a pleasant, firm and positive way. The kids know when Uncle Billy means business.
The club, in its third week, is still getting on its stride but I'm sure it won't be long before Sue and her team discover which of the kids are destined for a career in politics!
*Watch this space for news of today's Kids' Club. And a very special mention of baby Brian, he's now home from hospital to the delight of the whole family and recovering well.
Posted by Children of Watamu at 19:35