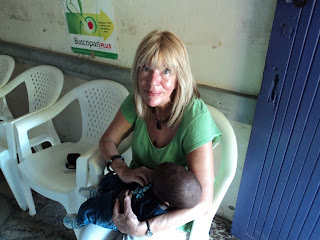 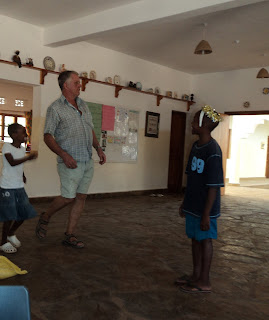 To say it has been a busy week is an understatement, writes Elizabeth Gomm.  It's been hectic!

Before we leave for the Happy House each day, Sue tells me some of things she would like me to do, but when we get there something unexpected will turn the agenda on its head.

On Thursday, for instance, it was an early morning trip to the clinic with  baby Harry. He come out in spots overnight and needed checking out.

Harry, our little Happy House miracle, has come so far. He's such a happy baby, always laughing and smiling and he has just the most delicious dimples.

I held him on the short drive to Nativo Clinic and almost as soon as the engine started Harry went to sleep. He didn't stir until we got back home – not even when the very nice doctor examined him.

It seems septic spots are a  common ailment here so now he has some antibiotic syrup to shift them and some cream to help them heal.

First on the planned agenda was emails and blog, but the power failed so that was an emails put on hold.

The plans for the first anniversary party on Sunday, March 20, are now coming together. The children will be putting on a fashion show. The girls will be wearing some of those lovely party dresses so kindly given by YOU following our appeal earlier in the year, and the boys will all have something new from our store of donated clothes to model.

Brenda, visiting from Wantage, and a very good friend of Sue, Dave and the Happy House helped me go through boxes of shoes to try to pick out any little party numbers. Once we had sorted them, it was then like a chaotic scene from Cinderella while the kids' tried them on to see what fit whom!

They are all so looking forward to the party and their catwalk debut and the excitement is building.

The kids helping Papa Dave unload the weekly shop from the car thought it was hilarious when he joined in our informal catwalk rehearsal showing how it's done. I really DON'T think so, Dave.

Yeterday afternoon Sue asked who would like to walk round to Grandpa Yaa's with her to deliver an invitation to him and Grandma.  In no time all the kids were at her heels, the bigger ones picking up a baby on the way. We all trooped round like the Von Trapps singing and skipping all the way. Grandpa and Grandma were delighted to see the kids who all sat quietly on the floor of their house while Grandpa went round and greeted each of them. He and grandma Peninah will, of course, be guests of honour at the party.

Everyone is so relieved to have baby Brian home from hospital. He's been through such a lot in the last few days and been so brave. At Kids' Club he was awarded  Star of the Week for bravery... a well deserved award  which will be kept in his  his memory box. There was commendations for Aunties Violet and Marion who stayed with him in hospital and a big thank-you to Uncle Billy for moving heaven and earth to get him the very best treatment in the fastest possible time.

For a charity as small as this it is hard to budget for the unexpected and the bill for baby Brian's treatment is a typical example – it cost 11,000kshg (approx £100) and a huge amount in Kenyan terms.

I know we'll all agree that it's money well spent – but now we must go the extra mile to raise a bit more ensure there is always plenty in the bank to meet cover both day-to-day and emergency costs of raising our wonderful family of remarkable kids.

Posted by Children of Watamu at 05:58