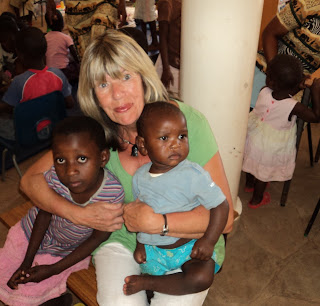 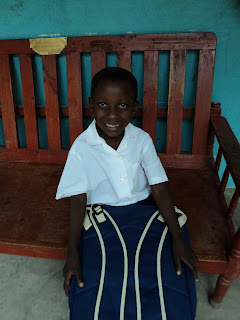 Meet Millie and Linus...
And now we are 39, Elizabeth Gomm tells the story:
Our Happy House family has grown by two with the arrival of Mildred, six, and her 10 month old brother, Linus.
Mildred, we are calling her Millie, arrived on Thursday evening and joined the others at school on Friday! She really wanted to go and despite any niggling doubts from "mother hen" Sue,  social worker Billy and I took her to school in a tuk tuk. She didn't talk much, but smiled a lot, and by the time we arrived at school and were waiting for all the paperwork to be completed, she was chatting to me in English. As we were walking to her classroom she caught sight of some of the Happy House kids and off she went, skipping and laughing.
Back at the Happy House Linus was not so settled ... missing his mum,  and crying, but our mums and aunties soon settled him down.
The children were referred by the children's officer in Malindi who had identified them as being at risk and rang Sue late on Thursday afternoon. Their dad,28, the breadwinner of the family died last year, before Linus was born, and after his  death his family turned their  back on their mum, pregnant with Linus, and they were forced to leave his ancestral land for Malindi where she has been struggling ever since, living in a sprawling slum, trying to get work but failing because of she had to carry Linus everywhere with her. Millie was unable to go to school because of lack of fees and other levies,  so she would stay at home babysitting while her mum went searching for casual work. Life was very bleak.
The Happy House is now a safe haven for the vulnerable little ones while their mum has a chance to start rebuilding her life and, hopefully, they will return to her once she can give them safety and security. Billy will monitor the situation, working with the children's officer, and in the meantime mum can visit.
The most important thing is that Millie and Linus are safe, well-fed, healthy and happy. And on day two that's just what they are. Even little Linus is smiling now!
They bring our family to 39 children, brothers and sisters in all but blood.
The magic just keeps on working...
Posted by Children of Watamu at 17:48