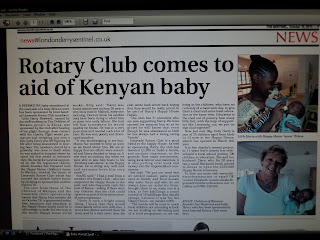 Harry makes headlines
Our miracle baby Harry Hayward, abandoned at birth weighing not much more than a kilo, is making headlines in an Irish newspaper.
Baby Harry,eight weeks premature, defied the odds by winning his battle for survival aided by the Happy House which provided Maldindi hospital with the milk, medicine, nappies and clothes he needed until he was well enough to join the Happy House family.
His story touched the hearts of Limavady Rotary Club in Northern Ireland which is supporting him, as part of his sponsor family, until he reaches 18.
The Londonderry Sentinel heard about our Harry and Elizabeth Gomm sent them this story.
Posted by Children of Watamu at 14:34