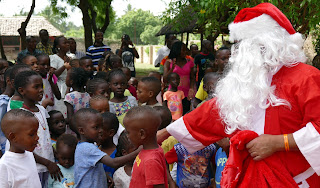 Smiles greeted Santa when he landed his sleigh at Happy House.
Around 150 kids jumped up and down singing Jingle Bells when, having parked his sleigh and out his reindeer out to grass,  Santa dropped in with sacks full of presents.

Our early Christmas Day started on a sweet not with a traditional treat, a sweet doughnut called mahambra, for breakfast.
They enjoyed every mouthful, and having got scrubbed up and changed they all gathered in the big banda to singing some Christmas songs, led by volunteer Rose Safari,  while they waited to hear Santa ring his bell.

Just before 10am to a rousing chorus of Jingle Bells, Santa and his elfin helper, made their entrance through gates which had been bedecked with woven palm leaves and bougainvillea flowers.
With kids rushing to greet him. Santa  made his way slowly towards the banda - a posse of excited kids in his wake.

Most have spent Christmas in our family before, some since we opened seven years ago, but for those who arrived in the last year our kind of Christmas is a totally new experience
Over the next hour and a half, Santa gave out presents to every child.

Handed their gift bag each  went back to their seat, eager to take a  peep inside their goody back and that of their friends, showing off what Santa and his helpers had packed up for them.
Once everyone had received their gifts, Santa waved goodbye to thanks and cheers from Mama Sue, Papa Dave and all our family.
With an hour or so left til lunch, our teachers put on a bit of a show with comedy, songs and more. 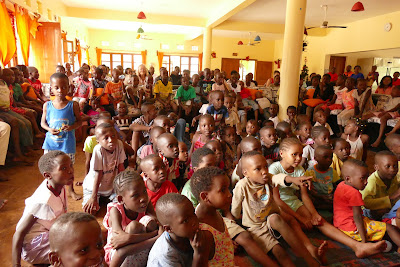 And while Papa Dave nipped out to the village to fetch the barber, Janet, Rukia and Jeddy go to work on Pete Reid's locks taking out the braids ready for him to undergo his headshave which has raised more than £600 in sponsorship  (pictures and story on tomorrow's blog!)
In the kitchen lunch was being prepared, and with all the family seated in the banda, along with guests Brenda, Red and Chloe Groves; Peter, Joanne and Jacob Reid, and Susana Gregorio, it was served.
Everyone tucked in to pliau rice and spiced chicken - just as requested by the children. 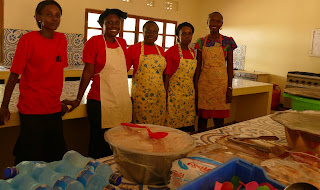 Afterwards, it was time to play -  each child doing exactly what they wished.
Later we all gathered in the lounge to watch a slideshow pictures old and new, with laughs and shrieks as the kids recognised themselves and their friends over the years
After half and hour of family snaps, we headed outside - leaving behind the one or two for whom the excitement and food had all been a bit too much and they'd dropped off the sleep
- to watch an impromptu performance  by our acrobats.

Earlier in the day Mama had talked about how Christmas is about much more than having gifts, and that the most important thing was that they were all together as a family -haring and caring.
And what a truly amazing family we have. Thank you to all of you who support us and who enable us to give children, who have suffered loss, extreme hardship or neglect, a childhood they will be able to look back on with a smile.
To make a donation to help us to make lives brighter please go to https://www.justgiving.com/childrenofwatamu/Donate

Posted by Children of Watamu at 04:00