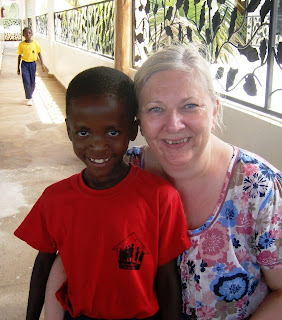 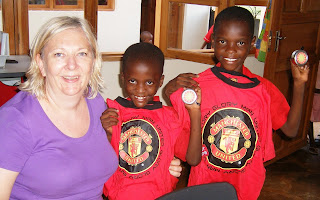 Dawn Heather White volunteers at the Happy House as often as she can , and is a fantastic fundraiser once back home in Bangor, Northern Ireland.
Dawn Heather, who sponsors Katana,  and a friend Judith Carson,  are just back after a recent trip.
Over the next few days we'll be catching up with some of Dawn Heather's  reflections on her Happy House moments.
Her first is on Being a Volunteer:

"I first visited The Happy House in April 2010 when met Katana, the young boy I sponsor, and his brother Fakiri who is sponsored by my sister.

" Since then I have returned twice as a volunteer and my next trip is planned for November 2011.

Anyone who visits the Happy House describes it as a magical place and it certainly has cast a spell over me!

" It is such a privilege to be able to spend time with the children whose spirit and resilience is a lesson to everyone.

" No matter how much time and effort I put into fundraising activities or working directly with the children, my efforts are returned one hundred fold.

"Several people have said to me that they would love to be a volunteer but they would find it hard to leave again. My response is yes, it is very hard to leave, but nothing can describe the pleasure of seeing children who have often experienced abuse and neglect, rediscovering the innocence of childhood and blossoming in the safety and love of the Happy House. "

*If you have anything you would like featured on the blog please email elizabethgomm@childrenofwatamu.net

Posted by Children of Watamu at 07:47