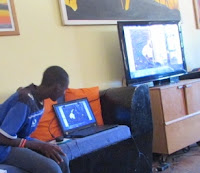 We had a lovely kids club this week, full of singing and laughter, writes Uncle Ronnie.
The kids were shown some slideshows of photos taken long time ago when most of our big kids were still little ones.
Musyoka helped operating the laptop which was connected to our lounge TV. The photos include those of Rukia, Samson and Musyoka which were taken together with some other kids.
There was a lot of laughter as some of the photos looks funny but most important is that there was a smile on each and every photo. 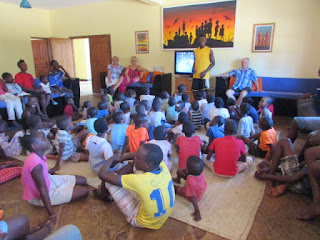 We also had our boys and girls competing in singing led by Benedict and Rukia respectively.
Linda Newman, Auntie Linda to our family,  who joined us at kids club was honoured to choose the winner and for the first time the boys won.
Teachers, uunties and our scholarship students also joined in singing.
Benedict, our very first Happy House kid, was turning 12and we celebrated his birthday,
Mama presented his birthday present. There was a lot cheering as Mama asked him to sing.
Benedict is not only a good singer but also a good entertainer, just seeing him on the stage makes the kids laugh.