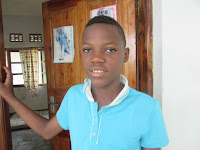 Happy House kid Brian Isiaho looks back to the sports day held during the school Christmaslholidays.

It was on Tuesday in the morning everybody went to the field to do the exercise. We played some games like volley ball, netball, football and some other games.
There two teams green and team orange.
We played a till break time.
The team leading in those games was team green and everybody in green was very excited. After break we went back to play.

First we started with netball, second was volleyball, third one was foot ball then we continued with other games.
The teachers were there with us enjoying the games and not forgetting my lovely Mama Sue, she was there enjoying watching the games.
Everyone loved that day.

Posted by Children of Watamu at 06:30