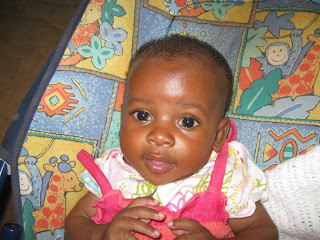 A sweet little baby we have called  Penninah was brought home by Billy, our Social Worker on the, 16th September 2010. Her case was first reported to Billy late July 2010. She was seen for the first time on 3rd of August and the family was found to be in dire straits financially.

However, they were encouraged to keep trying harder to raise the money needed for food through the 'community based' approach where friends and neighbours support each other.

Penninah was born to a 19 year school gir,l Kanze Nguma, who had to cut her studies short barely in class 6 .She has never told anyone  who fathered the child. Afterwards she developed hearing complications and you must be pretty close and have to shout for her to hear what is being said. We feel she will have been raped and is still traumatized. No action has been taken by the family towards her hearing impairment.

The father figure, Nguma Kalama developed a health problem, which looks as if it has been a stroke. He has been bed ridden for the past 2 years. It is hard for him to feed himself even if there is some cooked food for him.

The family is single-handedly depending on his wife, Nzingo Pola who has to look for menial jobs which are hard to come by. She has to provide for her other offspring Kitsao 16 yrs , Kalume 13, and Kabibi  9.

The family is surviving barely surviving through the support of well-wishers and other voluntary individuals who are also in the dire straits of poverty.

The Happy House would wish to help, but can only support the most vulnerable of all…….. and that is Peninnah. Our door is always open for the family to visit at any time.

Posted by Children of Watamu at 12:18