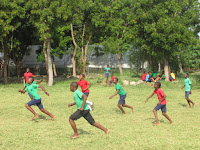 What better way to mark the end of exams than with some fresh air and exercise?
And that's just what happened at Happy House school when there was an inter-house competition.
The first game between Green and Red which ended with a score line of 1:0 in favour of the Green team.
The second team was between Yellow and Blue and the winning team was blue who a score line of 1:0
In the final between the two winning teams Green triumphed over Blue with a final score of 2:0.
With the whole school out to cheer on their house teams it was a noisy and happy event.

Posted by Children of Watamu at 07:00